not your usual designer item

Okay, I consider myself a designer, by virtue of the college degree that says as much.
And also by lifestyle.

That said, sometimes I laugh at "designer" things.
Designer shoes. To me, usually ugly.
Designer clothes.  Just because someone claims it is "designer" doesn't mean it will make you feel good when you wear it.
And, oh, designer hand bags.  I really hate the ones that are covered in branding, like the letter 'c' if it's by Coach, etc.  Can't you just come up with lines so distinctive that you don't even need to brand it?  It's not like it's a herd of cattle that's going to wander off.
Anyway.

I bought something yesterday that was designed well.
And it tickles me pink to think about it.
You want to know what it is?

.
.
.
A tape dispenser.
.
.
.
I needed one, I finally allowed myself to go buy one, and this pretty little thing enticed me with its curves.
Very unusual behavior for a tape dispenser, I thought. 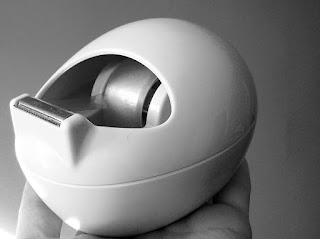 It's so pretty I even took a black and white photograph.  Now that's unusual behavior for me, the self-proclaimed Queen of Color and follower of Rainbow Brite.

I even bought it in white.  Usually, I want things in orange, or yellow, or any kind of neon.  Not this time.
Its shape needed to be shown in the purest possible way. 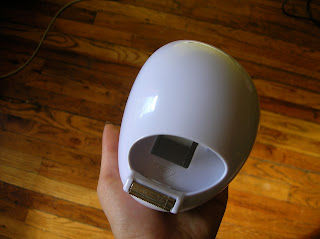 It's asymmetrical!  And yet, still so perfect.
*sigh*
I think I am in love with a tape dispenser.

Usually I make fun of the silly things that designers say about their work, but this quote I liked.
"The Pebble collection was created to bring an island of softness and serenity to the eye while inviting our hands to objects that are enjoyable and functional to use." --Karim Rashid

It does! I can't believe it! Now my only problem is that I want ALL my tools to be this aesthetically pleasing.
Should I ask this dude to design a sewing machine?  (That's the next big purchase on my list.)

I bought mine at the local Staples store, but if this post makes you want to run out and get one, I'll link you into amazon.  In case you're as taken with it as I am.

squirrel tree pc with a splotch of silver 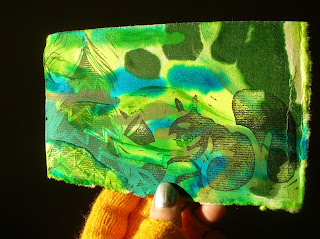 Pretty sweet piece of mail art that I sent out bravely into the world about a month ago.

(And it arrived safely!)

It's a block-printing, inky mess, and that's the way I like it.

Also, check out my silver nail polish.  I wasn't sure I'd like it, but it's just SO SHINY.
Sally Hansen, your "silver sweep" has swept me off my feet.
Maybe mostly because I was so distracted by my fingernails of uber-shiny-ness that I forgot to look at the ground and hit an icy patch.
Just sayin'. It could happen. But I'm glad it didn't...yet!

Posted by chewytulip at 9:35 PM No comments:


Etsy is doing a good thing for people on Valentine's Day.
They're taking donations of handmade or vintage valentines and distributing them to the elderly in NYC via City-Meal-on-Wheels.

You can read more about how to help here:

So, of COURSE I made some cards to send. 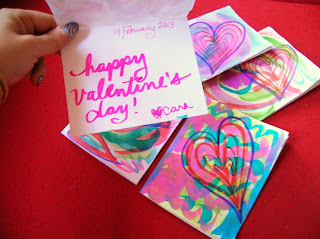 They suggest keeping it bright & happy, so I did.
And it wouldn't be complete without a little postal panache. 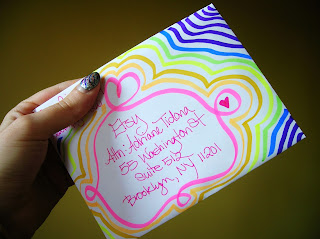 I really wish I could throw a card-making party...but I am pretty sure it would be just me and Taco. 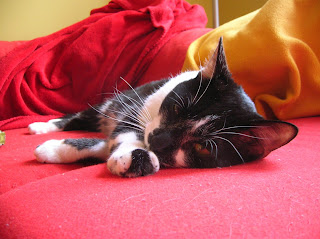 Taco says he gets bored when I spend all this time playing with paper.  I promised to play with him later!

Sometimes, mail art just happens.
When I pack up an order from my etsy store, I can't be a machine.  I'm me.
So things usually get covered in doodles, which is fiiiiiiiine.
This time, I accidentally composed some (extremely) terrible poetry and a matching doodle. 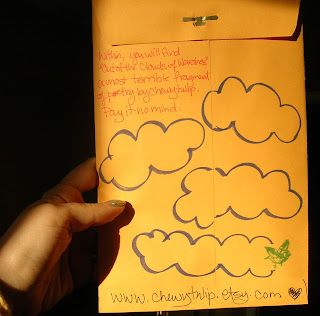 I'm never sure how the recipients feels about it, especially since it's often just flat-out weird.

This is the "poem" (haha) and card that went inside the envelope. 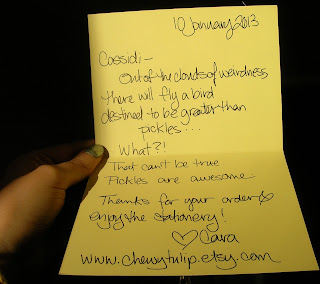 Sometimes I really do try for a straight-up thank you card.  But most of the time my intentions are derailed.
It's okay.
I know I'm weird.

Posted by chewytulip at 10:26 PM No comments:

I am the maker of useless things. 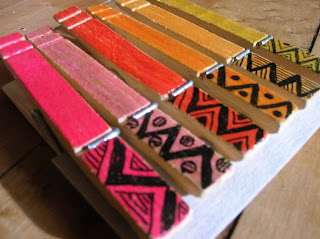 Add to my ever-increasing repertoire of things-I-make-for-no-reason-whatsoever...the clothespin.

I will be the first to admit that I make them simply because I enjoy the glide of the marker over the surface of the wood.
And then the delicate touch required to leave ink on wobbly wooden surfaces without ruining a technical pen?
Also a delicious experience.

Let's not even *mention* the amorous relationship I have with bright colors and patterns.

Add clothespins to the list of reasons why I must continue to mix my own permanent inks for markers.  :)
Everything I do is an excuse to do something else I enjoy.  That is the secret to happiness.
Or else I have inhaled too many chemicals from mixing permanent inks.  :D
Always a possibility.

Oh, and I put them up in my shop, too. Just in case someone else is as silly as I am.

Etsyversary! Pencil me in! Giveaway!

It's my fourth etsyversary on the 13th!
I'm excited!

So I decided to release a new product...which is is so cool that even though I MAKE them, I still kind of drool over them. 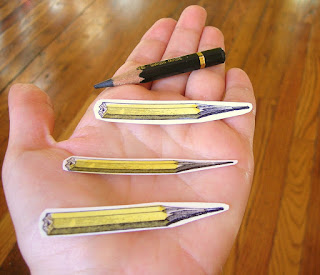 Okay, here's the giveaway info:
One lucky winner will receive a set of five pencil stickers in the mail.
Enter by leaving a comment below, telling me where you'd want to use these stickers.
Specifically.
Like, "I want to stick them to my sister Deborah's forehead, because she likes to draw and often makes fun of my doodles."
And don't forget I need to be able to contact you - an e-mail address is fine, if I can't contact you through a blog on this site.
Comment before midnight on the 13th of January, 2013!
I'll check on the 14th, and I'll pick the winner by random number assignments pulled out of a hat.  Or we'll see which number is on the piece of paper that Taco runs away with...whichever happens first.  :)
Good luck!  Remember, this might be the easiest contest you'll ever win! 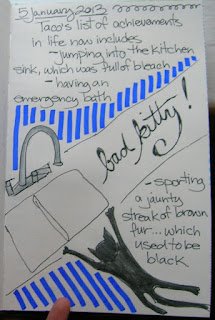 Now he's the cleanest kitty in the world. 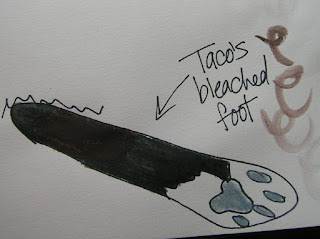 Disinfected, you could say.

At least he didn't bleach himself blond. 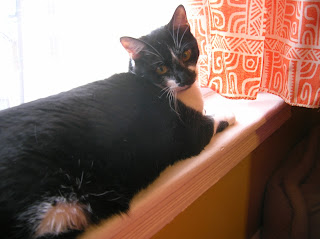 But he's fine.  And enjoying the wintery sunshine.

It's true.  I've got a triple-threat post revolving entirely around unicorns.

stationery: Available soon at chewytulip!
(Whaaaaaaaaat? I just sneak pre-viewed all over your face! Hope you've got patience!)
Unicorns, new paper colors, and a hot pink that's so hot it's scary!
I think I'll call it "apocalypse pink."
(Do I need to point it out? It's the one in the upper right corner, trying desperately to singe your retinas.) 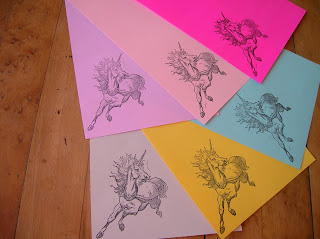 A very short comic, featuring the very same unicorn.
I actually put this on the back of an envelope heading out to Texas.
Hope he wasn't embarrassed. 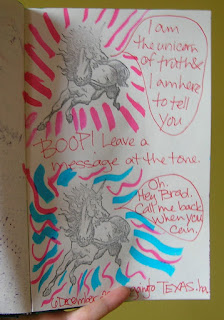 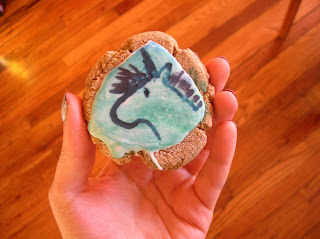 My dear friend Kim made me a pile (an actual pile) of cookies, with devastatingly awesome illustrations on the frosting.


And that's my unicorn-craziness for now!  (Don't worry, I'll be back soon - maybe even tomorrow!)

the ghost of typewriters past 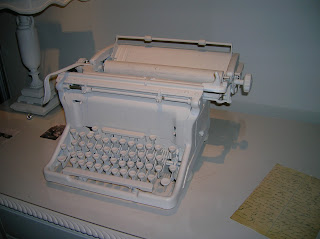 Back in November, we went to Washington, DC - which has some pretty awesome museums, thanks to the Smithsonian Institute.
We were at the Museum of American History, when I came upon a TYPEWRITER.
I was pretty excited.  I don't know - small moving mechanical parts? It's hard to say why I like them, but this one was painted all white as part of an installation within the exhibit.
And I was SO SHOCKED to see that people were apparently (sneakily) tapping on those keys.
There are letters typed onto that roll-y bit where the paper ought to be!

Also note the gum wrapper by the lamp.  I'm pretty sure that wasn't part of the exhibit. Awesome, right?
I dig anything that glows under black light, but it's even better when I can use it to send secret messages!
The pen with the invisible ink in it actually comes equipped with a small black light in the cap.
They thought of everything!

I've been watching these grow since the snow on Christmas eve.  They're getting to be a bit scary. 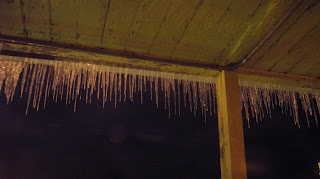 I snapped a few photos at night, thinking that they might be gone after the sun warmed them up.

But no.  Looks like we've got some new icy friends until spring! 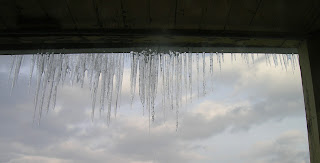 There they are in the daylight, about a week later.

Happy New Year!
It seems like everyone is wearing red today.  Are you?

Posted by chewytulip at 2:12 PM No comments: 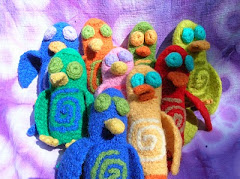